Mini-Dungeon #1 - An Exercise in Gridmapper

This is a mini-dungeon that I used in my AS&SH campaign (you can check the play report here). It was accessible through a trapdoor in a storage room in a Dagonite village. I redid the map in Gridmapper (my very first attempt using it) and typed the key verbatim from my notes. Where not noted, assume doors can be opened without much hassle. 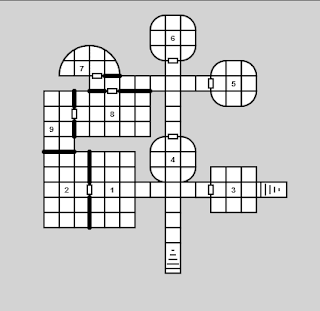 It has been quite some time since I made a list of upcoming OSR releases. Here are a bunch of games I am looking forward to reading.

Avatars & Annihilation
I have talked about Van Noa's game in my first "upcoming OSR stuff" post already. Since then, refinement of rules and editing has taken place, as well as some playtesting over Google+. There is no release date set, though.

Beyond Dread Portals
A game/setting to be published by D101 Games, sort of reminiscent of Planescape. There's a baroque, corrupt city with gateways to many other worlds. Intrigue and dimension-hopping adventures are to be expected.

Break!! RPG
A recognisably OSR game influenced mostly by JRPG and anime tropes. D&D-esque in mechanics, although not a proper clone. You may want to check the dev blog and the game's website for further information (and I suggest you do).

Chanbara
A Japanese-inspired OSR game, built off the Swords & Wizardry chassis, from the author of the Flying Swordsmen RPG. Check out his blog for further information.

Faerie Tales &  Folklore
A game set on a historic but mythological Earth. It is mostly notable for being Chainmail/OD&D-based, and for its design goal of borrowing directly from mythology, rather than through secondary sources. The author has made a couple previews available on Google+.

HMS Apollyon
I don't think there is anyone in the OSR who is unaware of Gus's HMS Apollyon setting: it's an imaginative horror megadungeon environment in the bowels of a gigantic ship full of weird shit. Not long ago a Player's Guide was published - and now we have this.

Lost Songs of the Nibelungs
A gritty Dark Age game not long after the fall of Rome inspired by Germanic legends and mythology. The author has been posting a lot about his design process that you might find interesting.

Monster Dungeon Quest
A game that truly wants to capture the adventurous and gonzo spirit of old-school games. Uses a descriptors (things are Powerful, Useful, or Cheap; pick two) and stunts (like Wushu) for resolution. Check the website for further information.

Wulfwald RPG
A continuation of Raedwald, Wulfwald is an Anglo-Saxon game about a bunch of outlaws doing missions for a Thegn in exchange for his protection. Basically, black ops in a fantasy world reminiscent of the early middle ages. There is a Google+ community dedicated to the game.
Posted by Ynas Midgard at 21:45 4 comments:


I have been slowly working on Grim Tales (a dark fairy D&D-esque game with an implied setting; sort of my contribution to the thematic games list) behind the scenes, but it was actually Brendan's latest post that inspired me to finally work out my Reactions.

Characters are basically either proactive on their turn or reactive in others' turn, but being reactive is just that: you forgo being proactive. I still need to work out the numbers, though, but playtesting will surely help with that.

Consider Donating Me a Coffee's Worth

Ynas Midgard
You can contact me at the e-mail address given on the left (view my complete profile first). I am always interested in editing jobs and potential collaboration.